Do you love a gallery wall as much as I do?  I have an obscene lack of wall decor in my house, and have been slowly trying to correct this particular deficiency.  The problem is how pricey it can get!  So, after I found a set of six large frames for $8 at a yard sale a couple of weeks ago, I set a challenge for myself--turn those frames into something fabulous without spending another cent.  Could I do it???

I won't make you wait--here's the final result:

I've been wanting to use these pictures for a long time.  My grandmother, who passed away in 2005, gave most of them to me years ago because she knew I was interested in our family's genealogy. I wish she could see how I have displayed them here.  A few are from my husband's family, and I was so glad to have those too.  I know I will love coming into this room and seeing them.


So, how did I get here?  Here's what the frames looked like before I started:


The women who sold them to me said she wanted to paint them all black but got sick of it halfway through.  I can totally understand that, because she was doing a very careful job with a paintbrush.  I, however, decided to go another way and did a very sloppy job with a can of spray paint.

Truth be told, it hurt a little to cover the black paint since I am usually all about black frames.  But these were going in my Craft/Guest Room, so they just had to be Heirloom White.  It was really the only choice out of the paints I had on hand...of Heirloom White, Silver, Outdoor Rustoleum Black, or Brown Primer, which would you choose???

I also got lazy with the backing and just used (what else?) burlap which I cut to size and attached to the included cardboard backing with spray adhesive.  Again out of sheer laziness, I used the cardboard fold-out hanger rather than attaching hardware to the frames.  If it works, I'm doing it!


The most fun part of this project was building my layout.  I got to sift through old pictures and play with the layout until it looked right to me.  I love this gallery because it is cohesive and simple, but I still got to showcase 32 (!!!) photographs.  That's a lot, peeps. 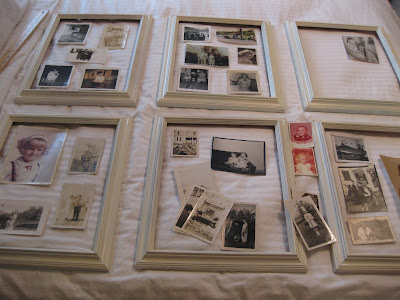 I used mostly black-and-white or sepia, but if I liked a color photo, I used it.  I love this one of my Grandmother's brothers playing their accordians together. 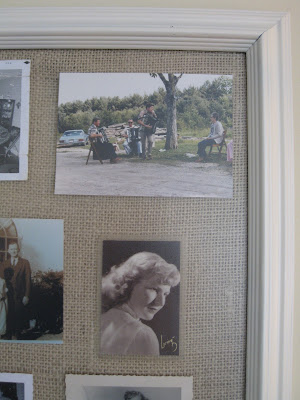 And these reddish ones of my husband and I:


I hesitated because they are so very, very red, but in the end I included them because they relate to the other pops of red in my room:


If I change my mind later, I can always change out the pictures.  I was careful to use a light touch to mount them to the burlap.  I used Stampin' Up's Stampin' Dimensionals (SU--here I go again endorsing your products!  I'm not even a consultant!)  They are removable and won't harm the backs of the pictures, all of which have notes on them. 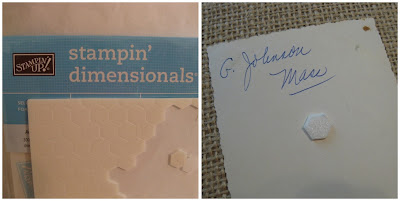 Speaking of the notes, I didn't trust my memory to come through in case someone asks me, "who's that?"  I can't even remember how to dress myself most days.  So I made a little chart for the back of each frame for reference:


So, I met my goal of not spending any more money, plus I have a gallery which showcases my ancestors, uses lots of pictures while still looking tidy, and fills a giant blank wall.  Here's what it now looks like from the hallway into my guest room, and my hope is that it warms up this room and invites people in to have a closer look. 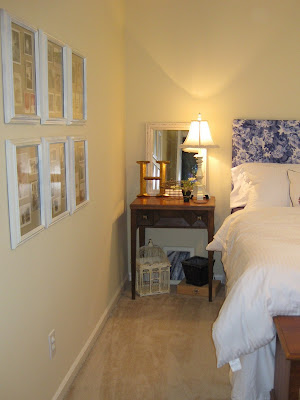