New Kitchen Faucet (and Why it Saved My Sanity)

This post contains affiliate links, but as always all opinions are 100% mine.

Our homes are bursting with little things that make a big difference in our day-to-day.  Just think about your kitchen faucet, for example.  Is it pretty?  Is it functional?

Mine was neither.  It dripped.  I could literally lose my single remaining shred of sanity listening to water (also known as money) dripping steadily down the drain. 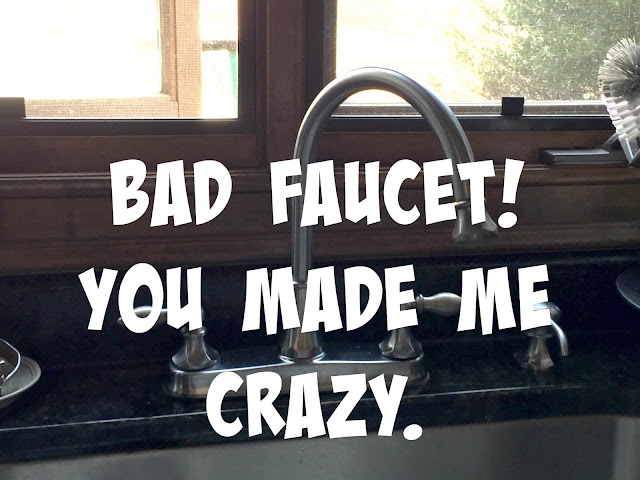 In the case of this sad, bedraggled faucet, it would drip constantly, but if you shut off the hot water and then pulled the handle back toward you, say an eighth of an inch but not as much as a quarter of an inch, it would stop.  Well, sorta stop.  It would drip every 20 seconds instead of two.

This fun little feature rendered me insane.  It gave me the hilarious nervous tic of pulling every and any handle ever so slightly toward me, whether I was in my kitchen or the Walmart bathroom.  It also gave me the endearing trait of running up behind everyone who ever used the kitchen faucet to adjust it for them.  It was *great.*

Hubs had done what he could.  My plumber (who was here for an equally fun job involving water pouring through my ceiling right before Christmas) said the faucet wasn't even worth repairing.

Enter: my new faucet.
After hours of research, I finally settled on the Kohler Cruette pull-down kitchen faucet, in the Vibrant Stainless Steel finish.  It was reasonably priced, very well-reviewed, and has this amazing "Sweep Spray" function (and a "pause" button on the sprayer!) which you can see in the video here.

Cue the angels singing.  It took about a week, but my nervous tics resolved.  More than that, I am appreciating the beauty of something designed well that performs well.  It does what I ask, when I ask, and there are no. more. drips.  Fairly simple change, sanity saved.

Where in your home could a simple change make a big difference?  One thing I learned from my last home is that we made a lot of improvements when it was time to sell, and that just stinks.  Much better to improve on things while you're still around to enjoy them!  Admittedly, sometimes cash is tight and we all have to make do.  But if you have the means to make a simple change sooner rather than later, especially for something you use constantly, it might just be worth saving your sanity.