We awoke Thursday excited to be on our way to Paris, but a little nervous about taking the train there.  We had just taken the train to Bruges, so we had some experience and knew (sort of) what to expect.  The difference this time was that we each had a 50-pound suitcase to haul along with us.  But, intrepid travelers that we are, we called a cab and paid him well to drive our luggage and ourselves two blocks to the train station.


After deciphering the Dutch signage and needing help from at least two locals, we finally found our platform and waited for our Thalys train to arrive.  When it finally did, we ended up last in line, probably because everyone on the train knew it would take us forever to get those suitcases on board.  The plan was for me to step on the train, haul my suitcase up the stairs (while Meems pushed from below), and then do the same with hers.  Just before I could pull my suitcase up, a man appeared out of nowhere and did all our heavy lifting for us!  "Wow, that was nice," I thought to myself.  Then, for a minute or two, Meems and I were totally preoccupied with how to stow our huge luggage into the tiny space available, wishing we could magically make more room on this train, Harry Potter-style.  By this time the doors were shut and we were about to start moving, when I looked up at Meems and said, "Meems, where's your purse?" 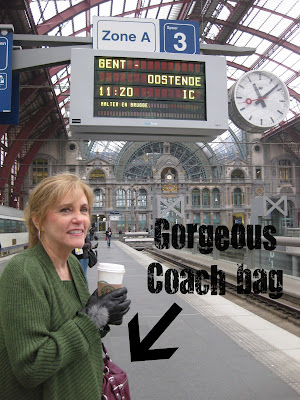 You guessed correctly--the very "nice" man helping us with our luggage also helped himself to Meems's brand-new Coach.  As she took her hand off the suitcase so he could help her, he slid the purse right off her arm.  At first we were both just in shock.  My heart literally sank.  Pretty soon, though, I realized I should alert the authorities.  So, I wisely spoke to the first offical-looking person I saw, who turned out to be a janitor.  But he was a very helpful janitor!  He managed to understand I needed assistance and took me to the conductors.  Somehow I was suddenly fluent in French, and even remembered the verb for "to steal."  The first conductor said, "you are responsible for your own bag, Madame!"  Lovely.

Fortunately, his boss came and ran him off, and after I explained what had happened, decided that he could indeed make a call to report the crime.  As I stood there he "called" both Antwerp and Amsterdam to let them know "there is a problem with the pick-pockets in their stations."  To this day I am not sure they were actual calls, or pretend calls designed to soothe the crying American woman.   So much for alerting the authorities!  Then, in true Belgian form, he offered me a beer.  Well, a drink, but we all know what he meant.  I declined the beer, went back to Meems, and we made a list of what we actually lost.  Very little cash, Meems's camera and phone, and--the hardest thing at the time--her passport.  Also some credit cards.  Sidenote: does anyone think it is acceptable that when you call to report a stolen card (using a stranger's phone on a train in Europe) they want to take 30 minutes to "verify" all your phone numbers, addresses, email, favorite color, and everything else about you?  Just CANCEL THE CARD!  We're traumatized here!

Once we got to Paris and to our hotel, we learned we'd need to wait until the morning to go to the Embassy, but decided to file a police report right away.  Can I just tell you how humbling it is to have to walk into a police station and describe a crime that actually occurred in another country, in a language you barely speak, to a police officer who thinks its hilarious that you can't understand a word she says?  But, one thing I learned in Paris is that if you are polite, they will like you...even if it takes a minute.  Once I said, "Please, more slowly please, I do not understand, not at all, please" she did slow down for me.  Then her partner, who I am not kidding looked exactly like George Michael, came in and he could actually speak some English. Plus,  he played "Purple Rain" for us on his iPhone.  Yes, it was surreal.  Two hours later, we had a police report of the incident.  And that is one way to quickly brush up on your French. Perhaps not the most fun way, but still.

To make this very long story somewhat short(ish), there is a happy ending.  We did manage to get Meems a passport at the Embassy on Friday morning.  And in the meantime we were able to count our blessings:
Blessing #1: Meems had (for the first time ever while traveling) packed her jewelry in her suitcase instead of her handbag.
Blessing #2: I had the debit card, and most of the cash.
Blessing #3: Our thief was really, really slick.  If he had been one of the more common thieves, the kind that snatch and run, we could have been hurt on top of being robbed.
Blessing #4: We were in Paris!  Sure, we both compulsively checked our pockets for the rest of our vacation, but we were in a beautiful city with things to do and people to see, and nobody could steal that.
Blessings #5 and so many more...too numerous to count.  God is good!

Plus, in-between trips to the police station and the Embassy, we squeezed in tons of sight-seeing.  That first afternoon we made it to the Luxembourg gardens, the next day we shopped and took a boat tour.  And on our last day we squeezed in not only Notre Dame, but also the Louvre and the Tuileries.  Everything in Paris is much, much bigger than I expected.  The Arc de Triomphe is gargantuan.  The Eiffel Tower is gigantic.  The Louvre is bigger than I could ever explain.  So, I was proud that we hit the high points.  Here's just a little of the beauty that is Paris...

Some pictures I took from our boat tour.  I was so proud to locate the boat and be there on time that I failed to ask if the tour was in English.  In fact, it was not.  But we did hear about Paris in 5 other languages!  Therefore, I have no idea what anything is called.


Tune in tomorrow for more of the City of Lights in my final installment of That Mommy's European Vacation! See you then!

P.S. If you are just joining me, this is Day 4 of my European Vacation series.  You can see the other posts here.